In Universal algebra freeness is a well defined algebraic property. We will explore equational theories which are tightly connected to free algebras. We will consider free monoids. Then we'll explain how monads can be brought into the picture in the context of monoidal categories. This will lead to a precise definition of a free monad as a free monoid.

This post requires familiarity with some very basic Category Theory and does not assume any knowledge on Universal Algebra. Most mathematical notions will be introduced but you might want to dig into literature for some more examples; though most of the books are quite lengthy and not suited for non-mathematicians - you've been warned ;). Knowing this I tried to bring all the required definitions, together with some very basic examples. As you read you may want to read about semigroups, monoids, groups, $G$-sets, lattices, Boolean or Heyting algebras from WikiPedia articles or try to find info on nCatLab (though this is is a heavy resource, with mostly with higher categorical approach, so probably better suited for more familiar readers).

We will need some preliminary definitions. Let's begin with a definition of algebra. For a set $A$ we will denote $A^n$ the $n$-th cartesian product of $A$, i.e. $A^2=A\times A$.

Examples includes many classical algebraic structures, like semigroups, where there is only a single operation of arity 2, monoids which in addition have one operation of arity $0$ - the unit element of multiplication. Other source of examples are Boolean algebras with two 2-ary operations $\wedge$ and $\vee$ or more generally lattices, Heyting algebras. Also rings, modules, fields, vector spaces and countless other structures. Universal algebra has a very general theory describing common concepts but also deals with very special cases of some of more esoteric algebras.

Many theories allow free algebras. Let's see some other examples:

Free algebras play an essential role in a proof of beautiful and outstanding Birkhoff theorem. It states that a class of algebras $\mathcal{C}$ is an equational theory if and only if the class is closed under cartesian products, homomorphic images and subalgebras. Equational theories are classes of algebras which satisfy a set of equations; examples includes: semigroups, monoids, groups or boolean or Heyting algebras but also commutative (abelian) semigroups / monoids / groups, and many other classical algebraic structures.

We need to be a little bit more precise language to speak about equational theories in the full generality of Universal Algebra, which we are going to introduce.

For example in groups: $x^{-1}\cdot x$, $x\cdot y$ and $1$ (the unit of the group) are terms. Terms are just abstract expressions that one can build using algebraic operations that are supported by the algebra type. Each term $t$ defines a term function on every algebra of the given type. In groups the following terms are distinct but they define equal term function: $x^{-1}\cdot x$ and $1$; on the other hand the two (distinct) terms $(x\cdot y)\cdot z$ and $x\cdot (y\cdot z)$ define equal term functions. The two terms $x\cdot y$ and $y\cdot x$ define distinct term functions (on non commutative groups or commutative monoids). Another example comes from boolean algebras (or more broadly lattice theory) where the two terms $x\wedge (y\vee z)$ and $(x\wedge y)\vee(x\wedge z)$ define equal term functions on Boolean algebras (or more generally distributive lattices). If $t$ is a term then the associated term function on an algebra $\underline{A}$ we let denote by $\tilde{t}^{\underline{A}}$. Term functions are natural to express equalities within a theory. Now we are ready to formally define equational classes of algebras.

We need a tool to enforce term equations. For that one can use

The key point now is that if we take the term algebra and take a quotient by the smallest congruence that contains all the pairs of terms which belong to the set $\mathbf{E}$ we will obtain a free algebra in the equational class defined by $\mathbf{E}$. We will leave the proof to a curious reader.

Let’s take a look on a free monoid that we can build this way. First let us consider the free algebra $\underline{\mathsf{T}(X)}$ for algebras of the same type as monoids (which include non associative monoids, which unit does not behave like a unit). And let $\sim$ be the smallest relation (congruence) that enforces $\mathsf{T}(X)/\sim$ to be a monoid.

It turns out that monads in $\mathcal{Hask}$ are also an equational theory. Just the terms are higher kinded: $*\rightarrow*$ rather than $*$ as in monoids. The same construction of a free algebra works in the land of monads, but we need to look at them from another perspective. Let us first take a mathematical definition of view on monads.

A monad is an (endo) functor m with two natural transformations: which is unital and associative, i.e. the following law holds:

These axioms are easier to understand as diagrams: 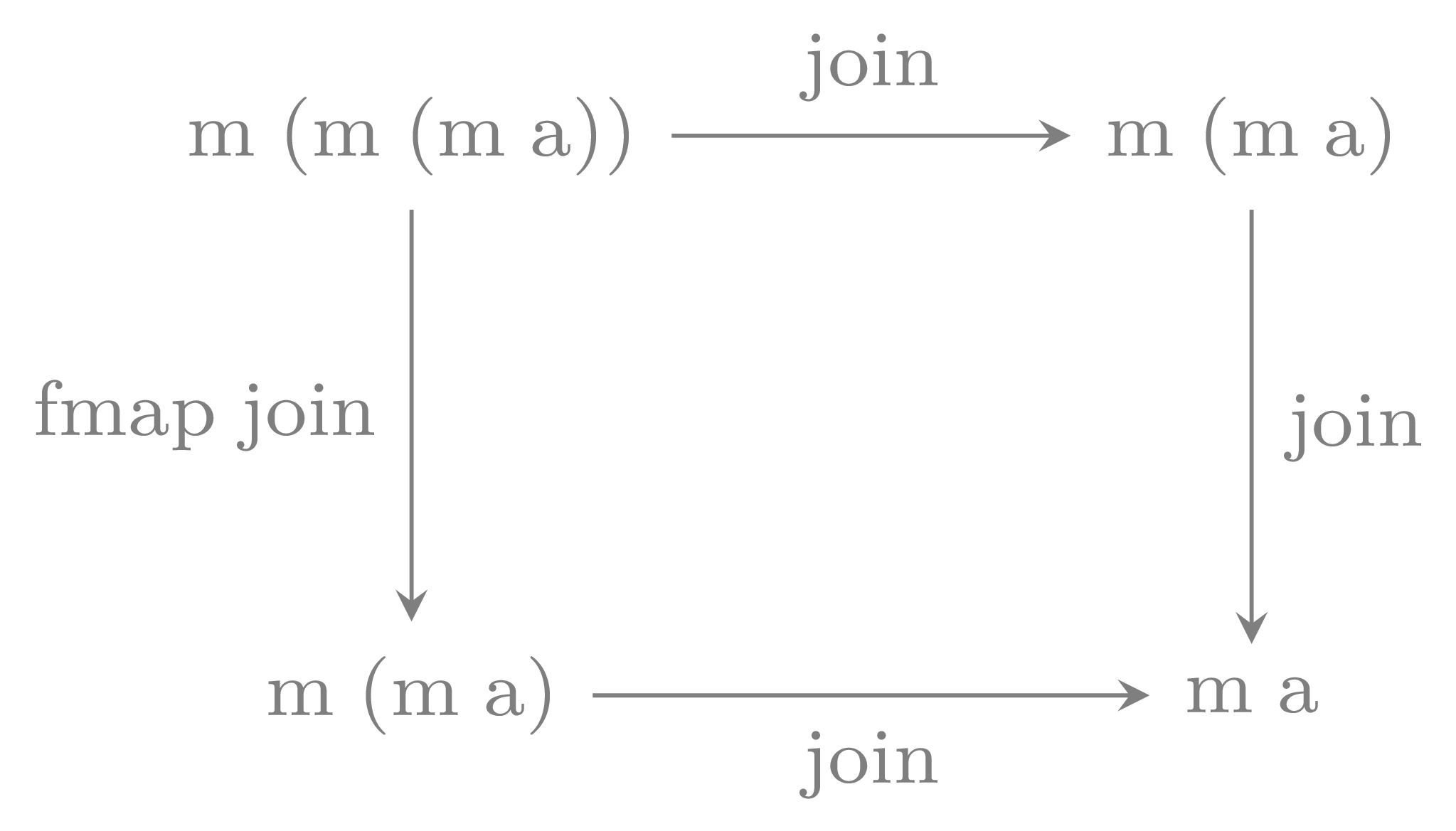 It is a basic lemma that this definition a monad is equivalent to what we are used to in Haskell:

Having join one defines >>= as

and the other way, having >>= then

Not only these two constructions are reverse to each other, but also they translate the monad laws correctly.

To define a monoid $M$ in the category $\mathcal{Set}$ (of sets) one needs the product $M\times M$. Abstraction of this structure leads to monoidal categories.

Category $\mathcal{C}$ with a bifunctor $-\otimes-:\mathcal{C}\times\mathcal{C}\rightarrow\mathcal{C}$ is called strict monoidal category if `\otimes` is associative and unital, i.e. for all $a,b,c\in\mathcal{C}$ $(a\otimes b)\otimes c = a\otimes (b\otimes c)$ and there exists a unit object $1$ such that $1\otimes a=a=a\otimes 1$.

Now we can generalise a definition of a monoid to such categories:

Definition Monoid in a Monoidal Category

A monoid in a monoidal category $\mathcal{C}$ with monoidal product $-\otimes-$ and a unit $1$ is an object $m$ with a pair of morphisms $$ \mathrm{mappend}:\;m\otimes m\rightarrow m\quad\mathrm{mempty}:\;1\rightarrow m $$ such that

The main point of this section is that these diagrams have exactly the same shape as associativity and unitality for monads. Indeed, a monoid in the category of endo-functors with functor composition as a monoidal product $\otimes$ and unit the identity functor is a monad. In category theory this category is strict monoidal, if you try to type this in Haskell you will end up with a non strict monoidal structure, where you will need to show penthagon equation.

These consideration suggest that we should be able to build a free monad using our algebraic approach to free algebras. And this is what we will follow in the next section.

Free f is just a tree shaped by the functor f. This type indeed embraces all the terms of types: a, f a, f (f a), ... into a single type. Now the monad instance:

As you can see, takes a tree of trees and outputs a bigger tree, that's what join does on the Return constructor.

Before formulating the next result let's describe morphisms between monads. Let m and n be two monads then a natural transformation f :: forall a. m a -> n a is a homomorphism of monads iff the following two conditions are satisfied:

Note that this two conditions are satisfied iff f is a monoid homomorphism in the category of (endo)functors of $\mathcal{Hask}$.

Let f be a functor, then Free f then there exists a morphism: which restricts to an isomorphism of natural transformations on the left hand side and monad homomorphisms on the right hand side, and thus Free f is rightly colled free monad..

Let start with a definition of foldFree. It's inverse is: First let's check that foldFree f is a morphism of monads: And we have

Furthermore, if we had polymorphic functions over monoidal categories in our type system, foldMap and foldFree would be specialisations of the same function!

Some examples of free monads

Let us study some simple examples of free monads

I hope I convinced you that monads are algebraic constructs and I hope you'll find universal algebra approach useful. In many cases we are dealing with algebraic structures which we require to satisfy certain equations. Very often they fit into equational theories, which have a very clear description and which allow free objects. Freeness is the property that lets one easily interpret the free object in any other object of the same type. In the monad setting they are really useful when writing DSLs, since you will be able to interpret it in any monad, like IO or some pure monad.